One of the most rewarding aspects of the work we do is witnessing the benefits that can result from our work. Working on the recovery of rivers can often be an uphill struggle, with positive changes taking time to manifest and come to the fore. This isn’t always the case however and a recent project that we have been heavily involved in has displayed some positive changes almost from the point of inception.

The site is on the River Cam, just outside the centre of Cambridge. Fishtek were commissioned by Cambridge City Council to design (both the outline and detailed construction design) a new natural bypass channel, with the aim of improving fish passage in the River Cam. Working with Cambridge City Council and the EA, Fishtek proposed a design utilising a clever automatic upstream flow control structure to vary flow into the pass, with the channel downstream of this point formed as a natural bypass channel of timber beams, rocks and gravel (built by Five Rivers). A couple of images of the final pass are shown below (all images courtesy of Ellis Selway, EA): 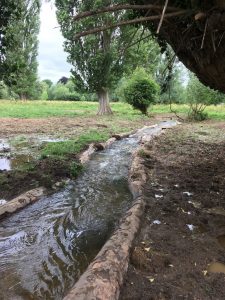 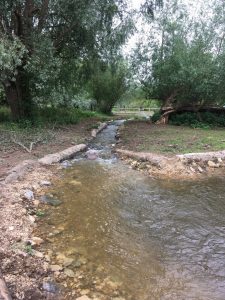 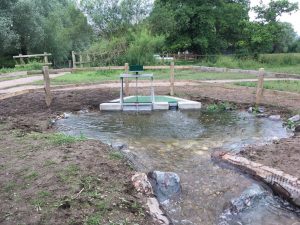 Although the pass currently looks a bit ‘raw’ with the bare ground exposed, that will quickly re-vegetate and the final structure will blend into the landscape. Within days of the pass being opened, fish were seen using it, including eels. More recently, dace and minnows have been seen using the pass, as well as some very large chub! An image of these is below (the dark grey splodges in the pic). This is all fantastic news and bodes well for the future performance and use of the fish pass. 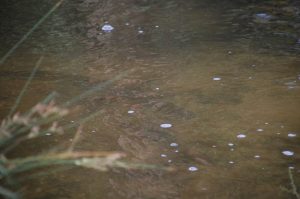