We are currently project managing the build of a fish pass that we designed earlier this year for the Severn Rivers Trust. It is on the River Teme, a major tributary of the River Severn. The fish pass is being built alongside Dinham weir in Ludlow, which made the news a few years ago when salmon became stuck at the weirs in Ludlow during a period of low river flows.

The pass is a large Larinier fish pass, comprised of a single flight and lead-in channel. All efforts are being made to ensure that the finished pass is as incongruous as possible and blends in with the surrounding landscape. The walls are therefore being finished with a stone-work effect and the area surrounding the pass will be landscaped, planted and seeded following construction. The fish pass construction has made news headlines and hopefully will do so again when the river’s salmon, trout, grayling and other species start making their way up the pass following its completion.

A couple of pictures of the ongoing pass construction, which should be completed very shortly, are given below. 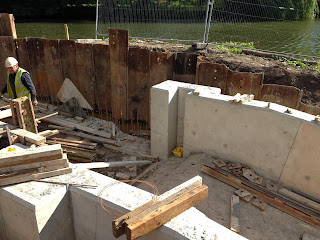 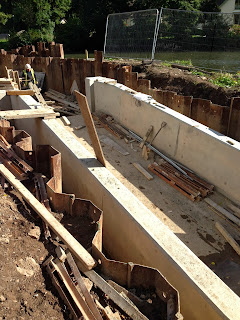