We have had confirmation today of some brilliant news – the Unlocking the Severn project has been granted the next stage of funding from LIFE and the HLF! Details can be found on the Severn Rivers Trust website HERE

This ambitious projects will build large fish passes at several weirs on the River Severn, as well as reduce the height of the lowest weir on the River Teme (a major tributary of the River Severn). In all, 158 miles of the river will be opened up to the passage of fish, providing a crucial opportunity for shad to return to the river above Worcester.

Fishtek have been working on the project with partners Arcadis for the Severn Rivers Trust and Canal and Rivers Trust for over three years. Specifically, we have been heavily involved in the design of the fish passes at the four main navigation weirs on the River Severn, as well as carrying out monitoring of shad numbers moving upstream at Upper Lode weir. We are very excited to see how the project now progresses and look forward to seeing shad (and other fish species) using the new fish passes. 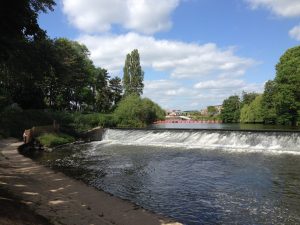