We have been involved in a very exciting project for the past year and a half and the official launch has just happened! The project, the intention of which is to restore shad back to their historical range in the River Severn, has recently been fully funded to the tune of £19.6 million!

Fishtek has a key role in the project as we are designing the fish passes that are being built on the large weirs on the River Severn, which were constructed in the mid 1800s to allow navigation up the river. Following their construction, shad disappeared from the majority of the Severn catchment as they are unable to swim upstream over the weirs, starting with the lowest on the river, Diglis weir in Worcester.

A series of fish passes are proposed at these weirs, designed specifically with shad in mind, that will enable them (as well as other species within the Severn) to successfully pass the weirs. The project’s website is https://www.unlockingthesevern.co.uk/

Following the formal launch yesterday, the project made national news in several papers and the BBC!

Watch this space for more news as the project progresses! 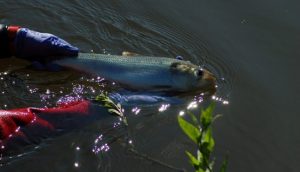