Fish can now move freely at the previous site of Rosehill weir on the River Rea, Shropshire, owing to the recent removal of the weir. Weir removal was first identified as a potential fish passage solution by Severn Rivers Trust in early 2014, who then commissioned Fishtek to project manage the works. Subsequent to a geomorphological study, habit survey and flood risk assessment weir removal was confirmed to be a suitable solution and planning permission and land drainage consent were granted. Castleford Engineering carried out the removal works early last week under the watchful eye of an archaeologist and ecologist. Works went smoothly and the migration barrier no longer exist, as shown by the before and after shots below. 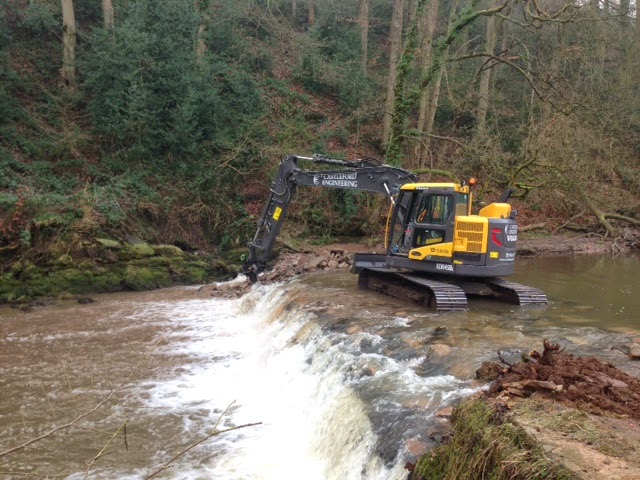 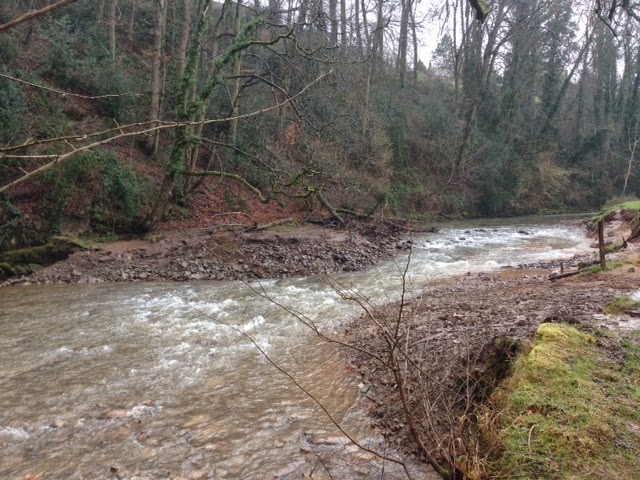 The River Rea is a tributary of the Teme, which feeds into the Severn, a major salmonid river. However, the Rea is currently failing to meet Water Framework Directive targets due to failing fish numbers and the weir removal, along with other works in the wider catchment area, will promote the return of migratory salmonids to the river, which boasts excellent spawning habitat in its upper reaches. Ongoing works by Severn Rivers Trust will further improve habitat connectivity in the Rea and promote the return of migratory salmonids. Of particular significance is the proposed fish pass at Lower Forge weir, a significant barrier downstream of Rosehill weir.
Wherever possible barrier removal is the foremost solution for improving fish passage and reconnecting habitat, although at many sites restrictions including flood risk, geomorphological impacts and heritage status may prevent the removal of a barrier. Where this is the case an alternative solution such as a technical or natural fish pass is often employed. A combined approach that incorporates weir removals and fish pass installations is therefore an effective method for improving habitat connectivity and promoting the return of migratory salmonids to our rivers.