Until recently, Whittcot weir on the River Clun (a tributary of the River Teme in Shropshire) was a barrier to migratory fish including Atlantic salmon. The Severn Rivers Trust commissioned Fishtek to investigate the feasibility of the weir being removed, which found that there would not be any significant detrimental effects of removing the weir.
A collaborative effort between Fishtek Consulting and Castleford Engineering following this feasibility stage saw the weir removed and habitat connectivity within the river has been now vastly improved.  The works have been carried out over the last week and the photos below show the completed works including the newly formed rip-rap bank. 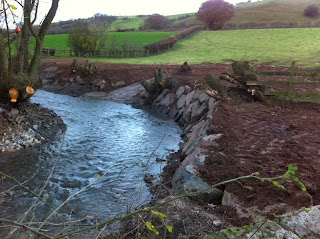 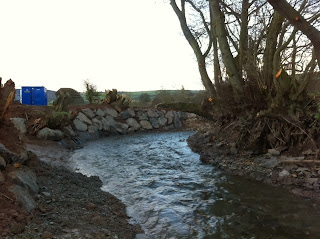 It is not always possible to remove a weir due to potential knock-on effects upstream (such as structures becoming weaker as a result of the weir being removed, or simple financial constraints. However, when possible, the removal of a weir is the best possible outcome for a river as it re-establishes ecological, hydrological and geo-morphological connectivity within the river corridor. There are some excellent videos explaining the impacts of weirs on rivers on the Wild Trout Trust website.