Back in February we worked with Castleford Engineering to remove Rosehill Weir on the River Rea, Shropshire, in order to reconnect habitat and improve fish passage. Details of the works can be found earlier in our news section. Since completing the weir removal we have been working hard to design and implement mitigation at Lower Forge weir, approximately 2 km downstream of Rosehill.  As can be seen from the image below the weir is a significant barrier to fish migration and without mitigation the full benefits of the works upstream will be missed. 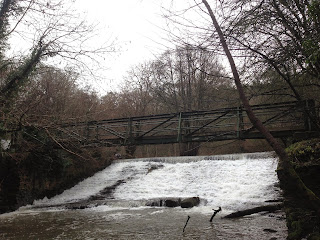 Image of the weir at Lower Forge. With a head of over 4 m it currently forms a complete barrier to upstream migrating fish.
A number of options were considered to improve fish passage at the site and unlike Rosehill, weir removal was deemed infeasible, predominantly because the weir also serves as a ford that must be maintained. It was therefore decided that a multi-species fish passage solution was required that would provide passage to salmonids (anadromous and potadromous) and coarse fish.  A redundant leat channel to the west of the weir was identified as the preferred location for a fish pass since the channel bypassess the weir, discharges close to the weir toe and would allow for the fish pass to be built off weir, therefore not increasing flood risk.
An options appraisal conducted by a civil engineer and fisheries biologist from Fishtek Consulting and a civil contractor from Castleford Engineering identified a combination pass consisting of a two flight Larinier fish pass with a resting pool and a series of notched pre-barrages as the most pertinent solution based on functionality, cost, build feasibility and aesthetics among other criteria. Fishtek subsequently designed the fish pass and applied for Environment Agency Fish Pass Panel Approval, Flood Defence Consent and Planning Permission, all of which were approved.
Since obtaining the necessary approvals Castleford have been able to get on site and start works. The site was already set-up and cofferdam in place from recent emergency wall repair works also undertaken by Fishtek and Castleford, allowing for the build to start almost immediately. As can be seen below, good progress has been made and some of the downstream Larinier flight and rest pool have already been cast.  As works progress we will provide further updates and images. 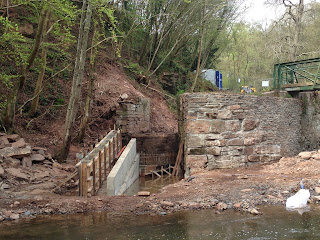 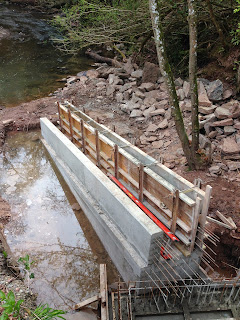 So far most of the downstream Larinier flight and part of the resting pool have been. The recent wall repair works to the right of the fish pass and supporting the footbridge can also be seen.
Once complete the fish pass will vastly improve habitat connectivity at the site and in combination with the weir removal upstream will allow migratory fish access to many kilometers of upstream habitat and valuable spawning sites within the upper reaches of the Rea. The works have been commissioned by the Severn Rivers Trust and largely funded by the Environment Agency and will contribute to achieving European Water Framework Directive Targets.